skip to main | skip to sidebar

Desperados: Wanted Dead or Alive belongs to the subgenre of tactical strategy. Such games have enjoyed success in Europe, but not so much in North America.

Although this game is called a Commandos clone; I do not think so, just as Crysis is not a clone of Far Cry. It has taken the elements of Commandos and perfected them. The setting helps show off these innovations.

The story is set in New Mexico, 1881. Many trains have been robbed the last few months by a bandit called "El Diablo". The railroad company has offered a bounty to anyone who can stop El Diablo. Bounty-hunter John Cooper accepts the task, despite the objections of bad-tempered Marshal Jackson, but soon learns the mission is not as simple as he first assumed.

He then decides to enlist the help of his old friends. The initial missions involve rounding up the gang members – Sam, Doc and Kate, each of who have tutorial missions. These missions are integrated quite well into the rest of the missions and they do not feel disconnected. Later in the game, two more characters – Sanchez and Mia - become allies, making it a total of six characters. 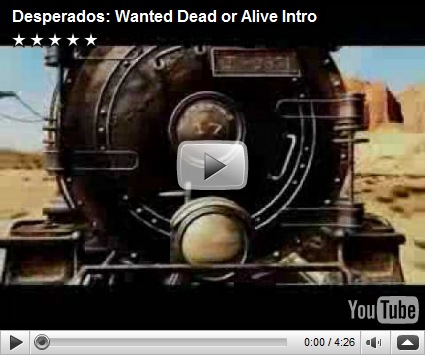 Each characters have unique abilities. The game does not impose stealth as heavily as Commandos did, this leaves a lot of room for different strategies. It is not necessary to maintain cover at all times, so Sam’s shotgun and Cooper’s colt come in handy often. The other characters have decent weapons as well, except Mia, who has a blowpipe, which I was not very useful.

I found that I did not use certain skills all that often. For example, Kate can blind enemies using her mirror, and I did not use this in the game anywhere but in the tutorial. Same goes for Doc’s balloon.

Copper is the protagonist, but he is not expected to do all the work in the game. Each character plays an important role, and its not as if they are useful at the very end to blow something up. It is possible to chose a certain character to perform majority of the tasks, but ideally, the game becomes a lot more interesting when all possibilities are explored.

Quick action comes in very useful when there are multiple enemies to take out, and multiple characters to control. What this does is, help you assign an action to each character, and “save” the action. This action can be performed quickly at the press of a button. Very neat feature.

Level design is fantastic that way. It is challenging without being frustrating. I never had to spend too much time trying to figure out a way, because often, there is not just one way to accomplish tasks. Of course, this game has the Commandos syndrome too, in that, if you need to blow up a bridge, you will need Sam to do it for you. The story involves travelling through the American west, Mexican haciendas, and heavily guarded prison fortresses, providing a lot of variety. There are also night and day missions, so the strategies employed will be vastly different. The game contains 25 levels in all, and it takes a while to complete them.

Enemy AI is fairly intelligent. There are vision cones to see the field of vision. Green indicates all is well and the enemy saunters around. Once suspicion is aroused, the cone changes to yellow and the enemy scans in all directions frantically to find you. This gives you a clear indication of the situation at hand.

Visually, the game is stunning. The artwork is beautiful, the detail that has gone into it is amazing. Graphics are in 2D, and I got the feeling that a 3D engine would have done more justice to the excellent style in the game. Zooming in would make the game a lot pixelized, so this is not recommended, but it is sometimes useful.

Cut scenes, voice acting and sound deserve a worthy praise. The story is very well told and all the characters sound authentic. Sounds in the levels are very well done. Night time levels have crickets chirping, and water cascading and so on, which add atmosphere to the levels.

Anyone who has played and enjoyed Commandos should definitely play this. Its fantastic and will give your money’s worth.

However, this game, like all others in the genre, has a high learning curve. I cannot imagine a casual gamer putting in the time and effort to plan each move to complete a huge level. Its not a fast paced game at all. It is meant to be enjoyed for a long time, not something that can be casually beaten.

diA very well written review on one of my most fav games:)
This game didn't really got the attention it deserved maybe because it was a pc game and most gamers tend to play console games these days. And you are right. It was not an easy game and it took rather long to learn how to play. The characters especially John an Doc were marvelous but Kate was kind of not really fitting. I have heard there was a Desperados2 3D but never tried that one. I guess chaning the iso graphic to 3D ruins the originality.

I am glad you like the review. This is one my favorite games as well.